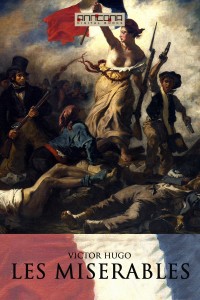 Les Misérables is a French historical novel by Victor Hugo, first published in 1862, that is considered one of the greatest novels of the 19th century. Beginning in 1815 and culminating in the 1832 June Rebellion in Paris, the novel follows the lives and interactions of several characters, focusing on the struggles of ex-convict Jean Valjean and his experience of redemption.

The novel contains various subplots, but the main thread is the story of ex-convict Jean Valjean, who becomes a force for good in the world but cannot escape his criminal past. The novel is divided into five volumes, each volume divided into several books, and subdivided into chapters, for a total of 48 books and 365 chapters. Each chapter is relatively short, commonly no longer than a few pages. The novel as a whole is quite lengthy by modern standards, having approximately 1,500 pages in in this unabridged English-language editions, and 1,900 pages in French. It is considered one of the longest novels ever written. Full translator footnotes are included in this version.

Examining the nature of law and grace, the novel elaborates upon the history of France, the architecture and urban design of Paris, politics, moral philosophy, antimonarchism, justice, religion, and the types and nature of romantic and familial love. Les Misérables has been popularized through numerous adaptations for the stage, television, and film, including a musical and a film adaptation of that musical.

Victor Marie Hugo (1802-1885) was a French poet, novelist, and dramatist of the Romantic movement. He is considered one of the greatest and best known French writers. In France, Hugo's literary fame comes first from his poetry but also rests upon his novels and his dramatic achievements. Among many volumes of poetry, Les Contemplations and La Légende des siècles stand particularly high in critical esteem. Outside France, his best-known works are the novels Les Misérables, 1862, and Notre-Dame de Paris, 1831 (known in English as The Hunchback of Notre-Dame).

Though a committed royalist when he was young, Hugo's views changed as the decades passed, and he became a passionate supporter of republicanism; his work touches upon most of the political and social issues and artistic trends of his time.